Homedelivery from tuesday till saturday to Belgium, Holland and Luxembourg. Order before 9am the day before. 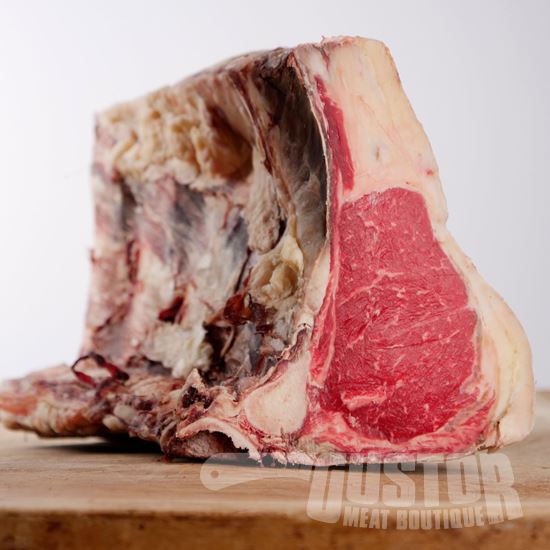 The sublime taste of Tuscany in a steak.
From €29.70
View product 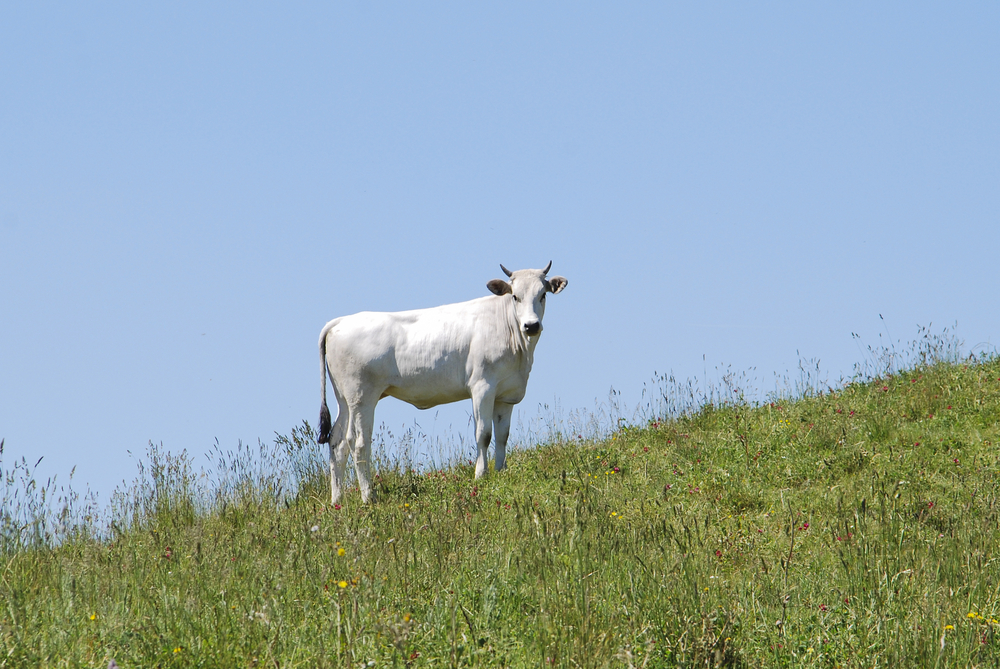 It's clear that Chianina beef triggers the imagination. The oldest race in the world has stunning looks: it's actually more than 2 metres tall (the tallest breed on earth) and has a pearl-white fur on a dark skin.

The Etruscs used them to work the fields but they also served as a ritual offer to the gods. Many centuries later the cultivation of this beef is still one of the most valued traditions in Tuscany.
Breeders in the valley of Valdichiana united in order to protect the traditional ways of breeding Chianina beef. This even led to a ministerial resolution pointing out three breeding farms that must preserve the race on a genetic level. The pedigree data of each cow are kept in the “libro genetico” with an accuracy greater than that of the average Italian.

The Chianina race is slow growing and the traditional breeding style only wants to produce superior steaks. The veals are born having a pale brown fur, the characteristic pearl-white colour appears after four months. Their menu consists of a mixture of wheat, corn , barley and straw. Everything is organised so that the cows experience as little stress as possible. The Tuscan breeders claim that they nurture the cows as they would their own children.

What does this traditional almost folklore like way of breeding culminate to?
A Chianina steak is low in fat and cholesterol, rich in iron and vitamin B, has a unique spiced taste and is extremely tender.
Could this be reason enough to get yourself some Chianina steak or would you dare to try a “Bistecca alla Fiorentina”: the Chianina recipe par exéllence?
Not an easy choice wouldn’t you say?

Rub your Chianina steak with olive oil and fry it briefly on both sides. The meat is not served rosé but downright bloody, sprinkle your steak with coarse sea salt, freshly ground pepper and again give it a rub with olive oil. A real Tuscan will eat his steak accompanied by some lemon slices and a few leaves of lettuce. This ancient and simple recipe is a fantastic ode to the pure taste of Chianina.
We offer you the top quality “Selection Emilia Romagna”, 100% pure race Chianina!

Didn’t receive a confirmation email? Be sure to check your spam box! The mail with the track & trace code can also be found there.

When stored under 7 ° C, the vacuum packaging guarantees a total freshness of ten days after reception. For poultry this is four days with a storage under 4 ° C.

In the freezer you can keep the meat for up to six months.

All products are shipped fresh - and therefore not frozen - unless stated otherwise on the website. No product was previously frozen.

A special announcement about smell, color and taste. Gustor Meat Boutique products are top products, usually matured and always full of flavor. If you have no experience with such products, you will undoubtedly notice that our products usually have a specific smell. Also, the slightly browner, matured color is different from the meat that you find in the supermarket.

This is completely normal. For example, an odorless wine cannot possibly be a top wine, and the color evolves as the wine ripens longer.

Because we work with fresh products, it is possible that a product is no longer available. Keep an eye on the website or email us to see when something is available again.

Delicious (and) fresh meat guaranteed, thanks to a combination of cooling and insulation.

The meat is cut to size as desired. Ordered multiple items? These are first individually vacuum packed, so hygiene and safety remain guaranteed. The packaged meat then goes into an insulating EPS (polystyrene) box, which keeps the meat in excellent condition during shipping.

At Gustor Meat Boutique we attach great importance to the environment. The packaging was specially designed by us and is environmentally friendly. The enclosed cooling elements are perfectly reusable and have been certified by an independent inspection body: non-toxic and suitable for cooling foodstuffs - in full compliance with the rules of the FASFC. If you still want to discard the box, it is good to know that EPS is perfectly recyclable.

Our meat is never sent frozen, unless otherwise stated on the website.

All weights on the website of Gustor Meat Boutique are global weights that make a payment in advance possible. The actual weight of the meat can differ, because the order is in its total weighted.

Gustor Meat Boutique guarantees that the difference between the two will never be greater than 5%. If the delivered weight proves to be more than the originally given weight, the customer obviously does not have to pay.

Should the difference still be greater than 5%, Gustor Meat Boutique provides a refund in cash.

The difference between the two weights is calculated with a subtraction sum and then multiplied by the average price per kilo of the purchased goods.

Customer service can be reached every day of the week including holidays and sundays from 8 am till 7 pm.

In case you still have any questions or you would like some assitance making your order, don't hesitate to contact us.